The Finnish IT Centre for Science (CSC) have published a new video: 'How do I authorise access to my sensitive data?'. Explaining the process of making your data open, the data access committee and authorisation tool.

The European Open Science Cloud (EOSC) Life project recently released their second newsletter. You can sign up here to find out about their news and events.

Galaxy have loaded fully consented genome sequences from 10 individuals from the Personal Genomes Project (PGP) along with transcriptomic and methylomic data in collaboration with PGP to facilitate training within the platform. These data are open and available to be looked at within Galaxy and please feedback to bjoern.gruening@gmail.com if you require specific analysis on this data.

The programme of SIB training courses for 2020 is now online. Over 20 courses are already planned, and lots more are yet to come!  The topics covered span areas such as NGS and other omics data analysis, single-cell, statistics, programming, machine learning, and several SIB resources.

gProfiler (https://biit.cs.ut.ee/gprofiler)  is a toolset for functional enrichment analysis and conversions of gene lists that is now available also at Galaxy platform. Galaxy is meant for supporting data intensive research in a convenient manner through building and using custom workflows.

Biological data analysis often deals with lists of genes arising from various studies. The gProfiler toolset is widely used for finding biological categories enriched in gene lists, conversions between gene identifiers and mappings to their orthologs. The mission of gProfiler is to provide a reliable service based on up-to-date high quality data in a convenient manner across many evidence types, identifier spaces and organisms.

gProfiler has been supporting developers by offering a standardized access through public APIs. The usage of APIs was simplified by wrapping them into Python and R packages. The latter, `gprofiler2` (which was published as a Conda Forge package named `r-gprofiler2`), was wrapped to be used as a set of Galaxy tools:

gProfiler Galaxy toolset was admitted to the Galaxy Tools IUC. It is distributed via the ToolShed and can be installed as a bundle with the gProfiler tool suite repository. 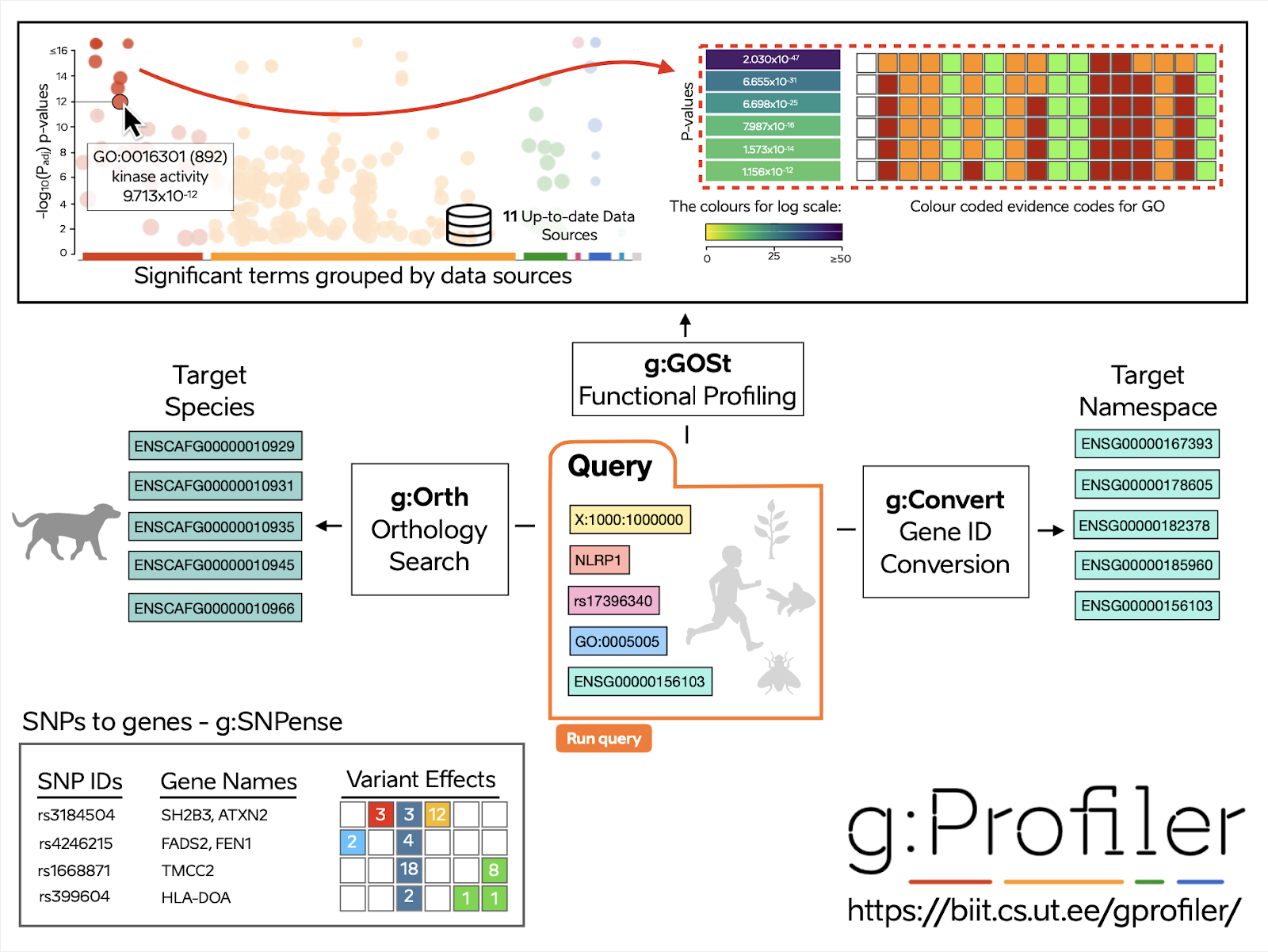 gProfiler is part of the ELIXIR infrastructure. It belongs to the portfolio of ELIXIR Recommended Interoperability Resources.

gProfiler is developed and maintained in Estonia, at the University of Tartu, Institute of Computer Science, BIIT research group. It is an ELIXIR Estonia service.

The slides and recording of the presentation on the ELIXIR Beacon & Beacon Network as a service are now available on the ELIXIR website.

ELIXIR Innovation and SME forum highlights from 'Distributed data analysis - the (health) data train' in Utrecht are available in the industry news release.

DNAstack have launched Clinical Evidence Beacons, extending from the GA4GH approved Beacon standard, as detailed in their latest news release.

We're pleased to announce the publication of the Intrinsically Disordered Protein (IDP) community's white paper in the ELIXIR F1000 channel.

FAIDARE, the Plant Data Lookup service, is now fully operational both with Phenotyping and Genotyping data! Five data repositories from EBI, INRA, VIB, CIRAD and iBET are connected to this service, and others from Europe and beyond will be available soon.

BrAPI, the plant Breeding API, has a new publication out in Bioinformatics: BrAPI-an application programming interface for plant breeding applications.

We are delighted to announce a Memorandum of Understanding between FAIRsharing and DataCite to identify a set of criteria for the recommendation of research data repositories for the benefit of the broader research community. This project will be used to improve the recommendations that FAIRsharing provides to journal publisher and funder policy makers.

Are you attending ICSB in Japan this year? De.NBI are hosting a full day satellite workshop on 31 October - "COMBINE & de.NBI Tutorial: Modelling and simulation tools in systems biology" with an impressive speaker lineup and agenda that still has a few spots remaining for free registration.

EMBL-EBI have launched a new sister resource to the GWAS catalog for Polygenic scores - the PGS Catalog. As a new resource, they are seeking input into how to develop the resource to meet user needs. Please fill in and share their survey. You can find out more from this twitter thread.